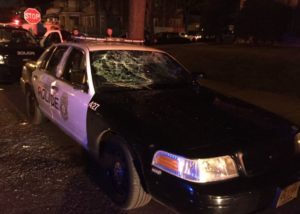 The shooting sparked two nights of unrest in Milwaukee’s Sherman Park neighborhood, with reports of several injuries, over a dozen arrests, protesters burning buildings and cars, and multiple reports of shots being fired. In a statement released Sunday night, Schimel said “I am saddened by the senseless destruction caused by a handful of citizens in Milwaukee and appeal for calm. I know the vast majority of Milwaukee residents are law-abiding citizens who want and deserve safe neighborhoods and communities.”

The Department of Justice’s Division of Criminal Investigation is now handling the investigation. Schimel said the agency “will work expeditiously to ensure a thorough and transparent gathering of the facts.”

Police Chief Ed Flynn said both the suspect and the 24-year-old police shooter were both African-American, and records show that Smith has a long criminal record which includes a shooting, and intimidating a witness to that crime. Flynn said he has reviewed video from the officer’s body camera in Saturday’s incident, and the unnamed officer got into a foot chase as soon as he left his squad car after stopping the offender’s vehicle for a traffic violation.

Flynn said Smith was armed, and sometime after he turned toward the officer with a gun in his hand, the officer shot him, and the entire episode lasted no longer than 20 to 25 seconds.

Both the chief and Milwaukee Mayor Tom Barrett said they hoped the body camera video would be released soon. The state Justice Department will make that call as part of its investigation.