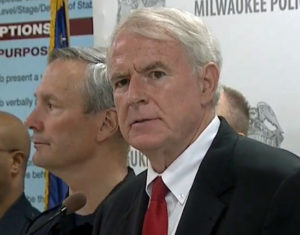 Milwaukee Mayor Tom Barrett is urging parents to keep their teenagers off the streets after 10:00 p.m., noting that the city will enforce its existing curfew. Barrett and Police Chief Ed Flynn commented Monday morning, following a second night of unrest in the city’s Sherman Park neighborhood, the site of a fatal shooting by a police officer on Saturday. Police say 23-year-old Sylville Smith was pointing a gun at an officer when he was shot and killed.

Barrett said body cam video of the fatal shooting would help diffuse tensions in the city. “I want the video released,” said Barrett, who has seen only one still frame. “I believe the video will provide a lot of context as to what’s going on. I understand the way the law operates. I’m going to urge once again that it be released as quickly as possible.”

Barrett said ongoing violence is harming the city and the neighborhood. “They’re making it more difficult, not less difficult to attract jobs in the very neighborhoods where we need them the most,”