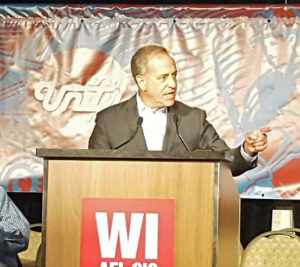 Speaking to a meeting of the Wisconsin AFL-CIO in Madison, Feingold said the state has for years felt the effects of trade deals that benefit corporations and not workers, citing the effects of NAFTA and the thousands of jobs that have left the state following its approval. “You know, better than anybody, the violence that is done by these trade deals of the past…and it’s still felt today,” Feingold told union officials at a meeting in Madison.

The Democrat, who is running to regain the seat he lost six years ago to U.S. Senator Ron Johnson (R-WI), said he would vote against any trade deal that benefits corporations over workers, if he’s elected in November. “It doesn’t matter if it’s a Democrat president or a Republican president – they want to shove through one of these deals, I’m going to oppose it.”

Feingold said that includes the controversial Trans-Pacific Partnership, which is still awaiting action in Congress. “We won’t be fooled by the TPP,” he said.

Johnson, the Republican incumbent, has previously said he’s not going to take a position on the TPP until after the election. Given his previous support for trade agreements though, Feingold argued it’s pretty clear how he will vote. “He’s totally for it…he just doesn’t want to accept the fact that people figured out these are raw deals,” Feingold said.

Johnson’s campaign accused Feingold of jumping to conclusions based on incomplete information. “Ron is a manufacturer who is doing the hard work of putting facts before politics. That’s why he based his ongoing review on the final version and has been talking with Wisconsin families, farmers, small businesses, and all others concerned with how this deal would affect Wisconsin workers,” said spokesman Brian Reisinger.