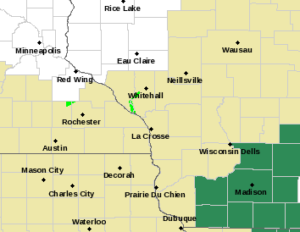 Parts of west central Wisconsin areas had the worst flash floods seen in decades on Thursday. Buffalo and Trempealeau Counties were hardest hit, as up to 7 inches of rain flooded most of Gilmanton and Independence and washed out a number of roads.

Buffalo County officials estimate up to $1 million in damage to public infrastructure alone, and major home and business damage was reported in both Buffalo and Trempealeau counties. Residents in Independence were warned that Bulge Lake was rising, and a voluntary evacuation was ordered in that area.

For Friday, 1 to 2 inches of rain are forecast in southern Wisconsin, and a flash flood watch is in effect through Friday night southeast of a line from Sheboygan to Platteville, including Madison and Milwaukee.