You are here: Home / News / Flooding overnight in southwest Wisconsin 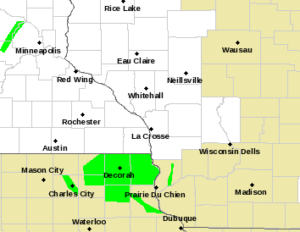 There was flooding overnight in southwest Wisconsin, but adjoining areas in northeast Iowa bore the brunt of heavy rains.

National Weather Service meteorologist Dan Baumgardt in La Crosse says repeat thunderstorms dumped up to six inches of rain in some areas where the terrain lends itself to mudslides and flooding.

Wisconsin Highway 35 reopened in Crawford County after being shut down Wednesday morning due to a mudslide.

The areas affected are just north of the Wisconsin River, impacting communities including Prairie du Chien, Richland Center and Boscobel. Baumgardt says the Kickapoo River and some of its tributaries are expected to remain high overnight before cresting on Thursday morning.

As of 5:30 a.m. Wednesday, the Weather Service said the Kickapoo River was over its banks south of Gays Mills. Six inches of rain was reported in the Basswood and Boaz areas, with the western portion of Richland County being heavily hit. Richland County Emergency Management Director, Darin Gudgeon reports heavy rain overnight led to flooding in many areas.

“As the water goes down, as long as we don’t see any more torrential rains like this, I think the impact that we have so far are the impacts we’re going to see,” Gudgeon said. However he cautioned that the ground is now saturated, and any additional rain could cause problems. He suggests residents in flood prone areas should be running sump pumps if they’re not already doing so.

Jim Hackett with Crawford County Emergency Management urged drivers to proceed with caution. “Make sure that if you see water across the roadway, stop and find another route,” he said.

According to the Weather Service, rainfall amounts ranged from 5.62 inches at Steuben in Crawford County, to 2.31 inches at Muscoda in Grant County.

The situation was far worse in northeast Iowa, where the flooding is being called “potentially historic.” Decorah has been inundated and school has been canceled. Nearly 8.5 inches of rain fell southeast of Decorah. More than 7 inches of rainfall was recorded at Decorah’s airport.

There’s a potential for more rain in the region over the weekend. “It’s really tough to say if the weekend rainfall will be a problem for flooding,” said Baumgardt with the Weather Service in La Crosse. “These types of events are fairly rare.”