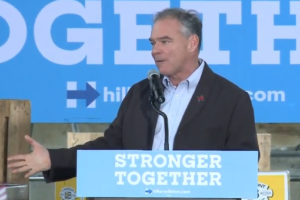 For voters this November, the question should be about whether they want a presidential candidate who has a plan to get people back to work, or one who would likely lead to millions of more jobs being lost.

That was the argument Democratic vice presidential candidate Tim Kaine sought to make Friday, during a stop at Lakefront Brewery in Milwaukee. The Virginia Senator spent much of his speech talking about Democratic presidential nominee Hillary Clinton’s five point jobs plan, which includes increasing federal investment in infrastructure projects, expanding access to debt-free education, and protecting the rights of workers.

On the Republican side, Kaine argued  Trump has offered very little outside of promises and no real clear plans. “When you try to get to the details with Trump…you just run into a complete lack of plans. He just says ‘believe me,'” Kaine said, asking the crowd, “Is there anyone here today who believes what Donald Trump says about any of his promises? Absolutely not.”

Kaine argued Clinton would be the “you’re hired president,” while Trump would amount to the “you’re fire president” – a shot at the GOP nominee’s catchphrase from his days hosting a reality TV show.

Kaine’s visit comes on the same day that Trump is scheduled to make a campaign stop in the state as well, with a rally planned with supporters in Green Bay later this evening.