You are here: Home / Packers / Matthews and Peppers cleared in NFL PED investigation 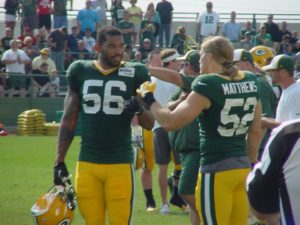 All three players took part in interviews last week at their team facilities.

The NFL Players Association fought to prevent the interviews from happening, but the NFL insisted that its investigators meet with each player individually.

Both sides drew their lines in the sand, but the NFL said it needed to speak to the players in person and set an August 26 deadline for those interviews to occur.

The NFL has now cleared four of the five football players named in the Al Jazeera report.  Earlier, they cleared retired Denver quarterback Peyton Manning.  The only player that hasn’t been cleared is former Packers linebacker Mike Neal.