You are here: Home / News / Mike Ellis laments the state of politics (AUDIO) 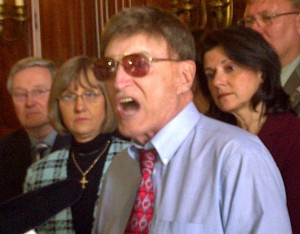 He spent over four decades at the Capitol, and now former Republican state Senator Mike Ellis laments the current state of politics nationally and in Wisconsin.

“It has been an evolution from civility to character assassination,” Ellis said during an interview on WHBY in Appleton. “When you cannot win the argument based on the merits . . . then they go after anything they can get to destroy your good name.”

In April 2014, Ellis announced he would not run for reelection, following the release of a secretly recorded video in which the long time lawmaker discussed an illegal campaign scheme.

In the radio interview, Ellis said Democrats and Republicans are even going after their own if they’re not “left” or “right” enough. “There is no middle ground anymore. Where do you see the word ‘moderate’ anymore in the political lexicon?”

“We are Americans first, and inside that big bubble called American dictums is the right to disagree without shooting your neighbor in the head.”