You are here: Home / Packers / Mortell’s journey comes to an end in Green Bay 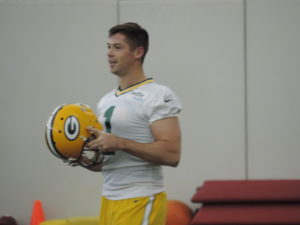 Green Bay native Peter Mortell’s attempt to make the Packers 53-man roster came to an end on Monday.  Mortell, who grew up in Green Bay and played his high school football at nearby Green Bay Notre Dame high school, was released as the Packers attempt to get down to the mandated roster limit of 75 players by 3 p.m. Tuesday.

It’s the second straight season that Masthay has had to face a competition in training camp.  He beat out Cody Mandell last season.

Masthay did set a franchise record for net punting average last season, averaging 40.3 yards, but lacked consistency and struggled down the stretch.

At his Monday press conference, coach Mike McCarthy said, “Tim Masthay’s in the driver’s seat.  It’s important for him to have a good week of practice and perform in Kansas City just like everybody.  We have a great history with Tim here.”

Mortell’s grandfather served as the Packers clock operator dating all the way back to the Lombardi era, a job his father eventually took over and currently holds.