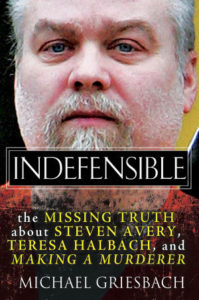 More scrutiny for the Steven Avery case. Manitowoc county prosecutor Michael Griesbach is out with his second book on Avery. Griesbach says those who believe in Avery’s innocence following the hugely popular Netflix drama “Making a Murderer” have been jumping on his case.

“My Facebook page was sabotaged by those who disagree,” Griesbach told WIBA. “Some pretty nasty stuff. It’s a bizarre thing that has happened since “Making a Murderer.”

Griesbach, a prosecutor in Manitowoc County, wrote his first book about Avery, “The Innocent Killer,” about Avery’s wrongful conviction for rape in the 1980s. He wrote his latest, “Indefensible: The Missing Truth about Steven Avery, Teresa Halbach, and Making a Murderer,” after watching the Netflix series.

“I started from scratch,” he said. “I’m a prosecutor, but I’m also on the Innocence Project board in Madison. I think Steven Avery is guilty.”