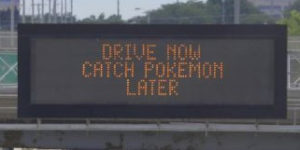 Inattentive driving continues to be a concern in the state, with nearly a quarter of all traffic crashes each year linked to people being distracted while they are behind the wheel of a car.

In recent weeks, the mobile game Pokemon Go has been raising new worries about drivers taking their eyes of the road so they can catch digital monsters. State Transportation Safety Director David Pabst says it needs to stop, and the Wisconsin DOT is urging people to not play the game while driving. “Before it was texting and driving, but not there’s all kinds of apps out there and the latest craze is of course Pokemon Go,” Pabst says.

The game has already been blamed on at least two crashes in Wisconsin. In those crashes, which both happened in Dane County, one driver ran into a tree and another ran into a utility pole. Both drivers were also cited for OWI.

The state has been working to raise awareness about the dangers of distracted driving for several year, including through a series of web ads. The DOT also put up messages on digital highway signs last month, which urged motorists to “drive now, catch Pokemon later.”