U.S. Senator Ron Johnson of Wisconsin has been under fire after suggesting last week at a wispolitics.com event in Milwaukee that videos could replace professors in college classrooms.

The comment came during a discussion about ways to reduce college costs and student debt – something Johnson has argued can be addressed by relying more on technology to help in the classroom. Johnson offered an example to the audience at the event of a way to teach better and easier. “If you want to teach the Civil War across the country, are you better off having tens of thousands of history teachers who kind of know the subject, or would you be better off popping in 14 hours of Ken Burns’ Civil War tape and have those teachers proctor based on that excellent video production.”

The comment has drawn widespread criticism, including from one of the subjects of his remarks. Burns, an award winning filmmaker, offered a rebuttal to Johnson Tuesday morning, saying on Twitter that “I’m here to support teachers, not replace them.” 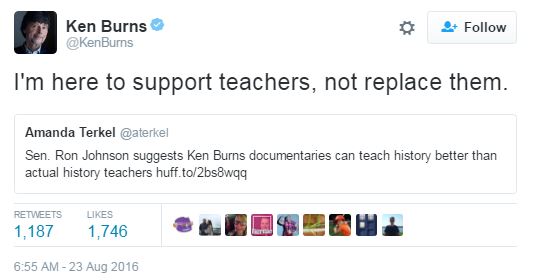 Johnson has since sought to clarify his comments. In a statement released by his campaign, the Republican said there’s a need for both good teachers and greater use of technology to educate students and to bring down the cost of higher education. “If you’ve got a fabulous lecturer on any subject, put that person on video tape and replay it. That’s the whole advantage of things like massive online open courses. You don’t need individual professors for everything when you find an excellent professor. Put them on video tape and let that individual be the lecturer for a host of other people. And then let other teachers, other professors go off of that and expand on that. It could just so dramatically improve quality of education while you’re lowering the price.”

Johnson is running for re-election against Democrat Russ Feingold, who the incumbent says shoulders some of the blame for rising college costs. His campaign claims Feingold was paid a high salary while lecturing across the country after he left office in 2010, following an election that saw Johnson unseat the Democrat. “You have an explosion in cost, which allows a university like Stanford to pay a guest lecturer like Senator Feingold $8,000 per lecture,” Johnson said.

Feingold has been campaigning heavily on issues related to college affordability. His campaign released an ad Tuesday morning that criticizes Johnson for previous comments about student loans, in which the Republican referred to them as “free money.” The ad accused Johnson of seeking to eliminate student loans and keep interest rates high.

“Sen. Johnson might not realize it, but he keeps going out of his way to show just how out-of-touch he is with the over 800,000 Wisconsinites who carry student loan debt,” said Feingold campaign spokesman Michael Tyler. “He can continue to disparage the dream of higher education as a ‘cartel’ and defend his out-of-touch policies to keep college financially out of reach for kids from middle class and working families. But the true cartel Wisconsinites face is Sen. Johnson’s blind allegiance to Donald Trump and corporate CEOs who want him to stay in Washington for another six years to protect their interests.”