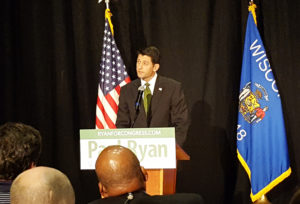 Speaking to reporters at the Janesville Armory Tuesday night, Ryan said he was humbled by the support voters showed, but also said he was confident about his victory early on. “We knew we were going to do well. We received the vote that we were hoping and expecting to get all along,” Ryan said.

Nehlen’s long-shot campaign seemed to pick up steam in recent weeks, after Republican presidential nominee Donald Trump offered some support for his bid and initially declined to endorse Ryan in his reelection effort. Trump eventually endorsed Ryan last Friday in Green Bay, but only after several days of criticism from prominent Republicans.

Ryan dismissed a question asking whether his apparent landslide victory over Nehlen means Trump is doomed in the November election. “I think it means right here in Wisconsin, people know me very, very well,” Ryan said. “People know who I am, they know what I believe in, and they know that I mean what I say and I say what I mean, and I don’t do it in a mean way.”

In a statement posted on Twitter, Nehlen thanked his supporters for an “amazing journey.”

Ryan will now face Democrat Ryan Solen in the November election, who defeated Tom Breu in the Democratic primary.