You are here: Home / News / Trump makes appeal to black voters in ‘law and order’ speech 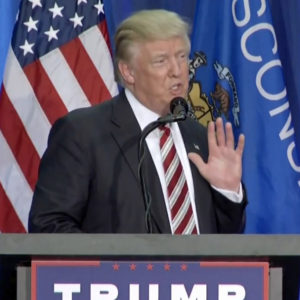 Donald Trump delivered his “law and order” speech in Wisconsin on Tuesday. Trump spoke in West Bend, in heavily Republican Washington County, but much of his focus was on Milwaukee.

Trump appealed to African-American voters, who he says Democrats have failed. “The Hillary Clinton agenda hurts poor people by far the most. There is no compassion in allowing gang members, drug dealers and felons to prey on innocent people,” the Republican nominee said.

Trump was introduced by Governor Scott Walker, marking the first time the Republican governor has appeared at a campaign event with his party’s presidential nominee. “There are two names, and only two names that will be on the ballot on November 8th who can be elected the next President of the United States. One is Hillary Clinton,” Walker said to a chorus of boos. “The other is Donald Trump.”