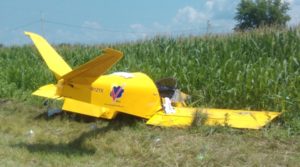 Two men were injured when their single engine plane crashed west of the Fond du Lac County Airport Wednesday afternoon. Sheriff’s Captain Rick Olig says the plane took off from the airport heading west. He says they were practicing taking off and landing when they ran into trouble.

As the plane banked it banked to low and caught a guide wire on a power line, which caused the plane to rotate and drove it into the ground. Both men were taken to hospitals. The pilot is a Neenah man in his 70s and the passenger is about 50 years old.

The pilot was taken from the scene by ambulance and Flight for Life helicopter flew the passenger to ThedaCare in Neenah. The plane was originally out of Oshkosh, but was practicing out of the Fond du Lac County Airport. Last Thursday morning two men from Santa Fe, New Mexico were hurt when their small plane crashed at the Fond du Lac County Airport.