You are here: Home / News / U.S. Senate candidates weigh in on unrest in Milwaukee 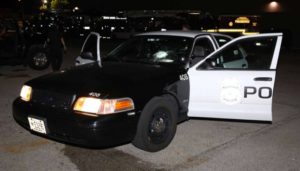 Milwaukee Police say an officer was injured when a rock broke the windshield of this squad car (Photo: MPD)

As Milwaukee continues to recover from a weekend of violence, two of the candidates for Wisconsin’s U.S. Senate seat talked Monday about the need for the community to work together to address some of the underlying issues behind the unrest.

Milwaukee’s Sherman Park neighborhood erupted Saturday night, after a police officer shot and killed 23-year-old Sylville Smith. Police said the African-American man was pointing a gun at the officer when he was shot. Protesters injured multiple police officers and destroyed buildings and cars during demonstrations, which went on from Saturday night through early Monday morning.

In a statement, U.S. Senator Ron Johnson (R-WI) said “one thing is clear: Further violence in Milwaukee will solve nothing. The solution to the enormous challenges facing our communities and nation will most likely be found with renewed faith and strengthened families. In order to heal, our community leaders and law enforcement officials need the support of all Wisconsinites as they carry out their difficult and dangerous work.”

During a stop in Madison Monday, Democrat Russ Feingold said “there is simply no excuse for violence or destruction of property, whatsoever…and that can’t be tolerated.”

Feingold, who is trying to regain the seat he lost to Johnson in the 2010 election, said the riots in Milwaukee are the result of economic inequality and a system in which minorities often feel they can’t trust their interactions with police. “This has a lot to do, both with insitituional problems of the past relating to race…but it also relates to economic problems. We as a state and a country have to do something to make sure this community is able join the rest of us as part of the rest of the community, instead of feeling separate and threatened.”

Feingold said it needs to go beyond just lurching from just one incident to the next saying only that there shouldn’t be violence and that police should be respected. “We have to move to a constant community dialogue, and a level of comfort between people of different backgrounds and different jobs, so that we can become a community again.”

Meanwhile, Libertarian candidate Phil Anderson blamed the violence on “government out of control,” saying in a statement that “the two parties in control of our government engage in manipulation, division, identity politics. They pit races, genders, economic classes against each other, for their own purposes.”