You are here: Home / News / Vice presidential candidates plan another swing through Wisconsin 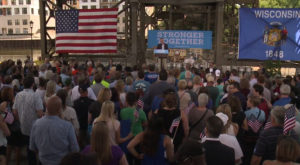 Vice presidential candidate Tim Kaine at a rally in Milwaukee earlier this month.

Both of the major party candidates for vice president have return trips to Wisconsin planned in the next week.

Republican presidential nominee Donald Trump’s campaign says running mate Mike Pence will be in Wisconsin Thursday afternoon for a town hall forum in La Crosse. The Indiana governor will appear at a rally in downtown Milwaukee later that night.

The stops will be Pence’s third swing through the state since he accepted the nomination last month. He was in Green Bay last Friday for a rally with Trump and made a solo stop in Waukesha shortly after the national convention.

Meanwhile, Democratic presidential nominee Hillary Clinton’s campaign says her running mate, Virginia Senator Tim Kaine, will appear next Tuesday at a private fundraiser being held at a home in Madison. Tickets for the event will cost between $400 and $20,000. Kaine also campaigned in the state last Friday in Milwaukee.