You are here: Home / News / Walker frustrated with Trump 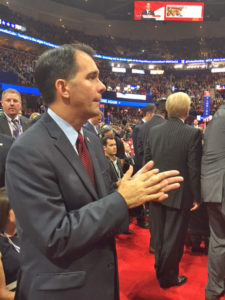 “What’s frustrating to me is I wish Donald Trump would just talk about Hillary Clinton, and what he’s going to do to make everyday Americans’ lives better,” Walker said.

Media attention this week has been focused largely on Trump’s attacks on the parents Captain Humayun Khan, who was killed while serving in Iraq in 2004. “I will never question a Gold Star family on anything,” Walker said. “They deserve our respect.”

Walker said Clinton’s email scandal, her lies to the Benghazi families, and questions about the Clinton Foundation, are among the issues Trump should be focusing on. “I just fundamentally still believe that Hillary Clinton is unfit to be president, and I’m not going to be party to seeing her get elected.”

Walker will be touring flood damage in northwestern Wisconsin when Trump and Mike Pence hold a rally in Green Bay on Friday, as the GOP campaign wrestles with the candidate’s latest misstep. Trump’s campaign admitted on Thursday that the candidate never saw a video of the U.S. offloading wooden pallets of currency in Tehran. Trump on Wednesday described seeing such a video.