You are here: Home / Sports / Antetokounmpo agrees to $100 million extension with Bucks 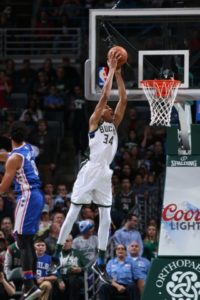 Three years after being drafted 15th overall by the Milwaukee Bucks out of Greece, 21-year-old Giannis Antetokounmpo has agreed to a four-year, $100 million contract extension.

The Bucks will hold a news conference on Tuesday to announce the deal.

Antetokounmpo will be entering the final year of his rookie-scale contract this season with the extension kicking in the following season.

Antetokounmpo moved to point guard last season and is expected to handle those duties again this year.  He finished third in the NBA’s Most Improved Player voting last season.

The Bucks open training camp in Madison next week.