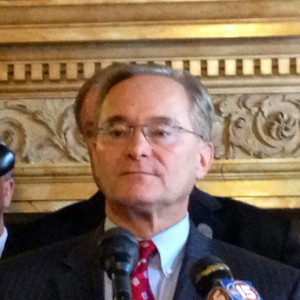 The request comes after court documents leaked by the Guardian newspaper earlier this month showed the governor raised money for a conservative advocacy group, the Wisconsin Club for Growth, which was active during the state’s historic wave of recall elections that targeted Walker and members of the state Senate. A group of Democratic lawmakers from the state Assembly on Thursday called on D.A. Ismael Ozanne to investigate whether that activity violated state campaign finance laws that were in place at the time.

The state Supreme Court halted the John Doe investigation the documents came from, ruling that there was nothing illegal taking place. However, Assembly Democratic Leader Peter Barca (D-Kenosha) argues the documents released by the Guardian go beyond what the high court had considered. “These are new issues that had not been brought forward before,” Barca said. “The Supreme Court in their decision did not look at this issue of accepting corporate donations that were illegal under that period.”

The governor has said that there was nothing illegal about what he was doing. In a statement, Walker campaign spokesman Joe Fadness called the complaint from Democrats “frivolous,” and argued that it fails to acknowledge the facts. “Several courts shut down the baseless investigation on multiple occasions, and there is absolutely no evidence of any wrongdoing.”

AUDIO: Rep. Barca explains how the issues in the complaint differ from those the state Supreme Court already rule on. (:55)

Prosecutors involved in the John Doe investigation have asked the U.S. Supreme Court to review the decision to end the investigation. Last week, Governor Scott Walker questioned whether people may have doubts about calls by district attorneys for new resources if Milwaukee County D.A. John Chisholm continued to pursue the issue after the nation’s high court issues a decision. “I think a lot of people wonder if they continue to spend time after the U.S. Supreme Court were to rule on this, if that’s really necessary, if they have time to spend on this after the courts have shut it down,” Walker said in Beloit last week.

Barca and others also want Ozanne to investigate whether those comments may have amounted to a threat against Chisholm. “We actually have statutes that prohibit that kind of activity…I never thought I would hear a governor say such a thing,” Barca said. “Especially when he’s the subject of many of the allegations that are out there.”

“These are very serious matters, and clearly they demand and cry out for attention and an investigation,” Barca said.