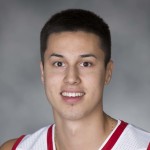 University of Wisconsin Badger men’s basketball standout Bronson Koenig says he had no doubts about traveling to North Dakota to protest a controversial pipeline project. “My brother asked me a week or two ago to travel with him to Standing Rock Reservation to fight to protect our sacred land and water,” Koennig told The Mike Heller Show on WTSO. “I’ve been wanting to go for so long, but I didn’t think I’d have any time or a way to get there.”

Koenig said he owes it to his fans in the Native American community. “It means more than basketball . . . or any shot I’ve ever made. It just means unifying with my people . . . to protect not only our water, but millions of peoples’ water supply and protect our sacred lands.”

The Standing Rock Sioux opposes construction of the Dakota Access Pipeline on land adjacent to their reservation. A tribal resolution states that the project threatens public health and welfare, water supply and cultural resources. An encampment of ever over 1,000 people, the Sacred Stone Camp, has been the scene of protests and arrests.