You are here: Home / Brewers / Brewers final homestand off to a tough start 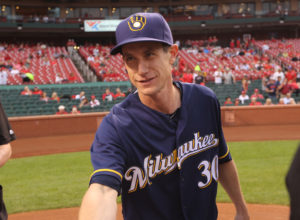 The Milwaukee Brewers final homestand of the season is off to a rough start.  The Brewers fell for the second night in a row to the Pittsburgh Pirates, this time by a 4-1 margin.

It was the sixth straight win for the Pirates at Miller Park.

“We haven’t swung the bats well these first two games,” said manager Craig counsel.  “Obviously missing Ryan (Braun) impacts the offense.  We’ve got a couple of guys who are struggling a little and not at their peak right now.  You’ll have stretches like that, nights like that.”

The Brewers managed seven hits off of Pirate pitchers, but no one batter had more than one.

The Pirates scored three runs in the first inning after two were out.  Andrew McCutchen clubbed his 24th home run of the season.

Chase Anderson gets the start tonight for the Brewers, who try to avoid a sweep by the Pirates.

Manager Craig Counsell was ejected in the fourth inning.

AUDIO: Craig Counsell on dropping the first two games in the series :15