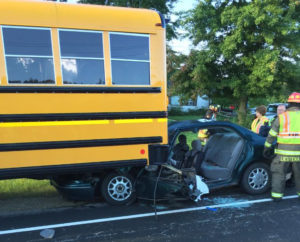 Sheriff’s officials in Monroe County say two drivers and several students were injured when a teen driver slammed into the back of a stopped school bus.

According to a release from the department, an 18-year-old driver hit the bus Wednesday morning, which was stopped on Highway 21 in the Town of Greenfield with its lights and stop arm operating. The car went under the bus and the driver had to be removed using the Jaws of Life. She was taken to a Tomah hospital with non-life threatening injuries.

The Sheriff’s Department says its investigation of the crash is ongoing.