You are here: Home / Badgers / Clement looks forward to his final season in Madison (AUDIO) 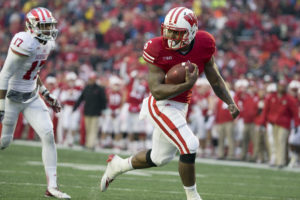 The 2015 College Football season is one that Wisconsin Badger running back Corey Clement has put behind him.  Because of injuries and off field issues, Clement’s name has fallen from the list of top premier running backs in college football.

When the Wisconsin Badgers open their season against LSU and their top running back Leonard Fournette on Saturday, Clement is looking to once again explode on the scene.

There’s literally no mention of Clement’s name when it comes to preseason Heisman Trophy consideration either.  That has Clement motivated to show that he belongs.

Clement underwent sports hernia surgery right after the season opener against Alabama last season.  While trying to return from that injury, Clement was cited for fighting on campus.  That was followed by Clement lying to his coaches about the fight.  The result was a loss of  trust by those around him.

Clement has spent the last several months trying to rebuild his image and win back his coaches and teammates.  He’s worked hard to get even stronger, add muscle weight and has taken on a leadership role.

Clement wants to play in the NFL, but he now knows it has to come as a team player, not chasing individual goals.  In fact, if Clement has any goals, he’s not sharing them.

His first chance to show the college football world that he’s back, comes Saturday (2:30 p.m. kickoff) against 5th ranked LSU at Lambeau Field.  The unranked Badgers are underdogs, which suits Clement just fine because that’s the role that he has been cast in.  It’s the perfect motivation for what Clement hopes is a big season to come.

AUDIO: Corey Clement doesn’t have any goals for this year :16