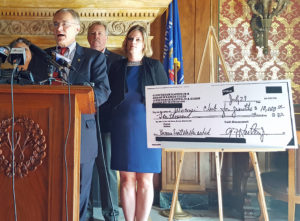 Assembly Democrats says a media report detailing Governor Scott Walker’s efforts to solicit donations to a conservative group raises many questions about the bills Republicans have passed in recent years.

Court records released by The Guardian newspaper show Walker helped steer wealthy donors to the Club for Growth, which advocates for conservative causes. The documents were from a now ended John Doe investigation, which was looking into allegations that Walker’s campaign illegally coordinated with outside groups during his recall election. The state Supreme Court halted the probe, but many of the documents have remained sealed while prosecutors ask the U.S. Supreme Court to reconsider the decision.

During a press conference at the Capitol Wednesday, Assembly Minority Leader Peter Barca (D-Kenosha) highlighted the memo line on a check mentioned in The Guardian report, which was marked “Because Scott Walker asked.” The Kenosha Democrat said that request from the governor resulted in corporate cash being funneled to “shadowy” special interests, which also raises the question “What did they ask for in return?”

Democrats pointed to at least one change in state law as a possible example of what those donations may have helped influence. The Guardian cited at $750,000 donation to Club for Growth made by NL Industries owner Harold Simmons, whose company made lead paint. The donation preceded efforts by Republicans to change state laws to make it harder for children sickened by lead paint exposure to sue paint manufacturers.

“It really gives a lot more questions to ask,” said Assistant Assembly Minority Leader Katrina Shankland (D-Stevens Point). “How many other bills…could have been influenced?”

Republicans have been mostly silent on the report since its release Tuesday morning. Multiple legislative leaders have not responded to messages seeking comment about the records released, which identify many of the donors to the Club for Growth for the first time.

Walker campaign spokesman Joe Fadness did release a statement Wednesday, which maintained the governor has broken now laws. “As widely reported two years ago, the prosecutor’s attorney stated that Governor Walker was not a target. Several courts shut down the baseless investigation on multiple occasions, and there is absolutely no evidence of any wrongdoing,” Fadness said.