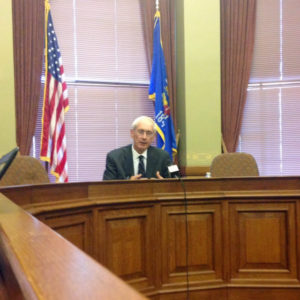 “The New York Giants pay a luxury tax to the Milwaukee Brewers so that they can compete. The same should hold true here. This is my luxury tax to provide a small amount of money to allow school districts to compete for those one or two teachers that they’re about to lose,” Evers said.

Evers, who delivered his State of Education address on Thursday at the Capitol, said the plan would provide “anywhere from 5 to 10 thousand dollars” for schools which receive state sparsity aid. “I’d love to be able to say ‘here’s 20 million dollars,’ . . . but if I can level the playing field in any way, that’s what we’re going to do.”

Evers said he’ll include the plan in the Department of Public Instruction budget proposal which he’ll submit in November. He voiced some optimism regarding the upcoming budget process

“We’re starting from a different place than we did last time around, in that the governor has indicated that he hopes to prioritize K-through-12,” Evers said. “I believe that the legislature will follow the governor’s lead on thinking that K-through-12 education is a priority. The devil’s in the details on how much of a priority that is.”