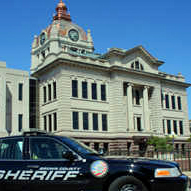 Brown County investigators are revealing more details in the ongoing investigation into the murder of Nicole VanderHeyden. At a press conference Friday, members of the Brown County Sheriff’s Department spoke about how investigators turned attention toward 38-year-old George Stephen Burch. Burch was arrested Wednesday morning.

The 31-year-old VanderHeyden was found near a field in Bellevue back on May 21. Investigators believe that she was beaten and strangled.

Poteat, along with Chief Deputy Todd Delain, remained tight-lipped about the connection between Burch, VanderHeyden and former suspect Douglass Detrie. Detrie, who was VanderHyeden’s live-in boyfriend, was arrested just days after her body was discovered. That’s after investigators located blood near the couple’s Ledgeview home and learning they had an argument in a bar shortly before her death.

Then on June 10, Detrie was freed from jail after prosecutors said they weren’t confident they had enough evidence to tie him to the murder. “At the time we arrested Douglas Detrie, we had probable cause to believe that he committed the crime. Evidence we collected at the time of his arrest and forensic evidence we received a couple weeks later helped exclude him as a suspect,” said Poteat.

Investigators would not comment about why Burch recently moved from Virginia to Brown County, an area where he has few connections. “We believe Burch moved to the area around a short time prior to the homicide,” Poteat said. adding that Burch became a person of interest approximately two weeks ago. Neither Poteat nor Delain would comment on why Burch returned to Virginia days after VanderHeyden’s death, before returning to Brown County.

As for clearing the name of Detrie, who has kept a low profile following his release from jail nearly three months ago, they would only say that he’s no longer a suspect.

“The action taken at the time, based upon the information we had, we took appropriate action that was supported by the district attorney’s office and the court,” Delain says. “We followed the evidence. Upon following up with that evidence, that led us in another direction.”

“Mr. Detrie and his family are hopeful that the man being held in custody is the correct person who is responsible for this horrible tragedy, and if so, that the prosecutor will charge him. Mr. Detrie, his family and his legal counsel have steadfastly maintained throughout this matter that someone other than Douglass Detrie killed Nicole. The recent arrest of the new suspect, who is not connected in any way to Mr. Detrie, shows this to be true.”

Burch is being held on $2 million bond and returns to court on September 16. At that time, a criminal complaint is expected to be released. Brown County District Attorney David Lasee petitioned to have the probable cause statement sealed at Burch’s first court appearance Thursday.