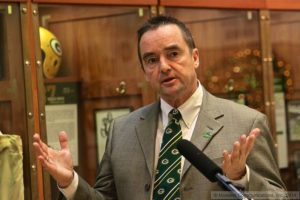 Green Bay Mayor Jim Schmitt’s loudest critic on the city council is asking for a review of options to remove Schmidt from office. Alderman Guy Zima requested that at the start of Tuesday’s city council meeting,

“He could have been charged with 20 felonies and it’s been reduced to three misdemeanors,” Zima said. “We don’t know if the judge is going to accept it or not but one way or another, he’s got to toe the line”

Schmitt has stated that he will not resign, despite pleading guilty to three misdemeanors dealing with campaign finance violations. The mayor did not address the charges against him or Zima’s request Tuesday. Schmitt did talk briefly before the meeting, saying that based upon his attorney’s request, he will not address the charges against him until after it a settlement is reached in court.

A hearing is scheduled for October 5th. Alderman Bill Galvin said council action should await that outcome. “We can’t be judge and jury before this thing is all said and done,” Galvin said. “We have to see what the final outcome of the court hearings are going to be and then from there we’ll have to see what happens”

There are a number of ways the mayor could be removed from office. If the council is going to do it, nine of the 12 aldermen will have to agree on removal. A recall election is also possible, but so far, no effort has been started.