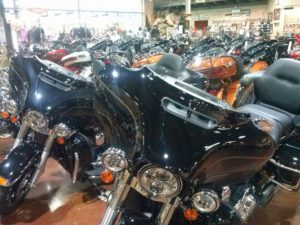 Motorcycles sit on display in the showroom at Harley-Davidson of Wausau (Photo: Raymond Neupert)

Harley-Davidson has confirmed the layoff of 39 union employees from their Tomahawk facilities by the end of the year.

The Tomahawk factory has been the only supplier of the fiberglass parts for the motorcycle manufacturer, including sidecar bodies, saddlebags, and windshields, since 1965. The layoffs are expected to stretch out through the fourth quarter, which begins in October.

Tomahawk Mayor Steven Taskay says that he hopes this isn’t the beginning of a move away from Tomahawk by Harley-Davidson. “Harley-Davidson has been giving to the city of Tomahawk for all of those 50 years through donations and purchasing…for the city. It is immeasurable what they’ve done for us.”

According to Taskay, the first shift employees are still being kept on. The factory runs in two ten-hour shifts.

The mayor has already begun working on finding a landing spot for the laid-off workers. “I’ve been in touch with Madison already, and local Lincoln County economic development personnel there, and they’re working feverishly to try to help the displaced workers find other employment in Lincoln County or Tomahawk.”

About 200 employees will be affected total as the company adjusts for lower sales figures than expected. The Menomonee Falls engine plant will be impacted as well.