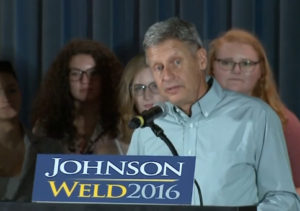 Libertarian presidential candidate Gary Johnson made his first stop of the campaign in Wisconsin Thursday night.

Speaking to supporters at Milwaukee’s Serb Hall, Johnson laid out his vision for an economy driven by choice and proposed a shake-up for federal tax policy. “I’m not getting elected king, I’m not getting elected dictator, but if I could wave a magic wand when it comes to tax policy, I would eliminate income tax, I would eliminate corporate tax, and I would replace all of it with a federal consumption tax,” he said.

The former governor of New Mexico also took aim at Republican nominee Donald Trump’s calls to deport undocumented workers and build a wall along the border with Mexico, arguing that those workers are taking jobs Americans don’t want and blaming a broken immigration system for causing the problem. Johnson called for putting the focus on making it easier for them to get a work visa.

Johnson has seen support picking up nationally, as many Republican-leaning voters look for an alternative to Trump. The latest Marquette University Law School poll out this week had Johnson at 11 percent in Wisconsin.

Johnson has been trying to turn that support into a chance to appear at the debates, something he argued would help to raise his visibility among voters, the majority of whom don’t know anything about him. “The first presidential debate is projected to have more viewership that the Super Bowl…if we’re in the presidential debates, and I believe there’s a better than 50 percent chance that we will, 100 percent of America will know who we are.”

Presidential candidates need to be at 15 percent in five national polls in order to be included in the debates.