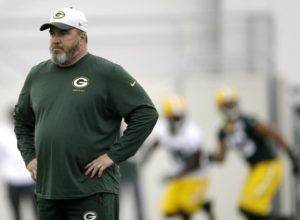 The only significant injury in the game came early when Packers fifth-round draft pick Trevor Davis left with a shoulder injury and he didn’t return.  He appeared to be in position to make the Packers regular season roster, but this injury could change things.

Fellow receiver Jared Abbrederis had a solid game, catching two passes, one of them a 40-yard reception.  He also returned five punts, one of which went for 42 yards.

Callahan finished the game 13 of 24 for 143 yards, one touchdown and no interceptions with a quarterback rating of 85.9.  The Packers backup offensive line struggled and Callahan was under constant pressure.

Callahan played well enough in the preseason to win a spot on the Packers 53-man roster, but Mike McCarthy may not want to carry three quarterbacks.  If that’s the case, the Packers will be crossing their fingers, hoping he would clear waivers to make it back to the teams practice squad.

Guard Lane Taylor struggled in his final preseason outing.  He had three penalties and allowed a third quarter sack.

The Packers newly acquired punter, Jacob Schum came through with an impressive performance.  Schum punted eight times against the Chiefs, averaging 45.5 yards per punt with a long of 57 yards.  He also pinned the Chiefs at the nine-yard line twice.

The Packers coaches will spend early Friday morning watching film and then will go immediately into discussions, along with the teams personnel department, about the final roster makeup.  They have to be down to 53-players by 3pm on Saturday.

The Packers open the season a week from Sunday at Jacksonville against the Jaguars.

AUDIO: Mike McCarthy is happy with the preseason :19

AUDIO: Jacob Schum on his punting performance against the Chiefs :16