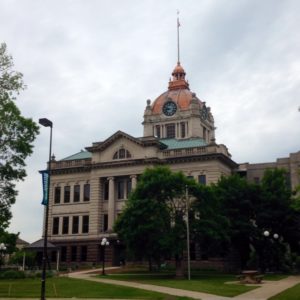 Green Bay Police say a woman has been arrested after she allegedly pulled a gun on a man outside the Brown County Courthouse Wednesday. Officers responded to an area near Jefferson and Doty Streets around 5:20 p.m.

According to police, the incident involved an ex-boyfriend and girlfriend that quickly escalated. A nearby officer was able to get the situation under control quickly and the woman was arrested.

“It was a loaded gun, so that is inherently dangerous when you are pointing it somebody,” said Lt. David Paral of the Green Bay Police Department. “We’re looking at, at least disorderly conduct and recklessly endangering safety by use of a weapon.”

The woman is being held in the Brown County Jail. Formal charges have not yet been filed.