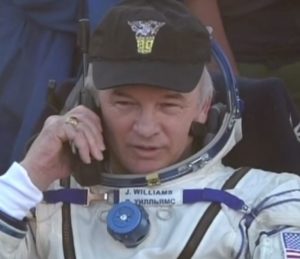 After spending more than a year in space, Wisconsin native Jeff Williams is back on Earth.

Williams, along with two Russian crewmates, landed safely in a Soyuz spacecraft Tuesday night in a remote area of Kazahkstan. The return marked the end of Williams’ fourth mission aboard the International Space Station, which saw him spending 534 days in space this time – breaking the U.S. record for days in orbit.

NASA said Williams and the other crew members contributed to hundreds of experiments during their mission which involved biology, biotechnology, physical science, and earth science. Williams took two spacewalks in which he installed a docking adapter for spacecraft to connect to the space station, retracted a thermal control radiator, and put in two new high definition cameras.

Williams, who is from Winter, also made use of his time in space by taking photos of the planet from above, which he shared on social media.