You are here: Home / Brewers / Reds blank Peralta and the Brewers 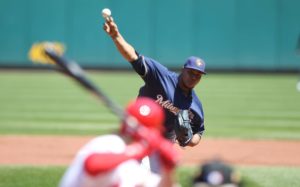 The Cincinnati Reds had four straight two-out singles, scoring three-runs in the first inning and held on to beat the Milwaukee Brewers 3-0 in their series opener at Great American Ballpark.

Wily Peralta (6-10) allowed six hits and a walk while striking out five in six innings of work, but the Brewers weren’t able to give him any runs.

Peralta made it through six innings for the sixth time in seven starts since rejoining the Brewers’ rotation in early August.  His ERA is 3.51 over that span.

Brewers starting pitchers have posted a combined 2.91 ERA in the last 21 games.

In his second start of the season, Cincinnati’s Keyvius Sampson helped the Reds hold their opponent scoreless for the second straight outing.

The Brewers managed just six singles overall and were shut out for the eighth time this season.

Matt Garza pitches game two of the series for the Brewers tonight.