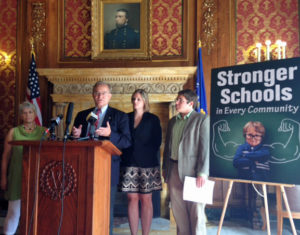 Democrats in the Wisconsin state Assembly point out that some state aid to rural school districts has plummeted. Assembly Republicans say they plan to give the issue attention in the upcoming legislative session.

A memo from the non-partisan Legislative Fiscal Bureau shows state sparsity aid to rural districts declined an average of 13.5 percent over the last three state budgets – but many have seen drops of 50 percent or more.

“Unfortunately their only recourse has been to spend their time in passing referendums. And it’s clear that taxpayers support their schools when 80 percent of these referendums passed last spring,” said Representative Peter Barca (D-Kenosha) the minority leader in the state Assembly.

During a press conference on Thursday, Democrats also charged that the decline in state funding has made it tougher to recruit and retain teachers. “It’s created almost a toxic environment around teaching,” Barca said. “I have met with the school admnistrators in my district. They have multiple positions they can’t fill said Representative Beth Meyers (D- Bayfield).

Assembly Republicans have included a number of education initiatives in their proposed agenda for 2017, including addressing the financial challenges to rural schools. “There are significant flaws in our school funding formula that harm some rural school districts,” the document released this week states. “We will explore options for providing financial assistance to the high property value districts, particularly rural, lake districts that receive either ‘no aid’ or ‘primary aid only.’ This could help make the funding formula fairer for certain northern districts.”