You are here: Home / News / Some roads remain closed in Chequamegon-Nicolet National Forest 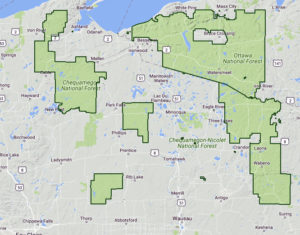 After the July windstorm that knocked down trees throughout the Chequamegon-Nicolet National Forest in northern Wisconsin, some roads have now been re-opened while others will remain closed.

Among the popular recreation areas that received significant damage in the storm are Morgan Falls and St. Peter’s Dome. Both are great places to view fall colors but will be closed until damages have been addressed making the sites safe for visitors.

Mike Morgan, a ranger for the Great Divide Ranger District, says the forest still has many places that are open including scenic vistas at Quartz Hill and Chute Pond on the east side.

Martin says they are making steady progress and have been “working closely with local residents and towns to reopen critical routes for school buses, logging operations, construction projects and general travel through the forest.”

Visitors are also reminded about closures still in place north of Highway 2 in the Washburn Ranger District.