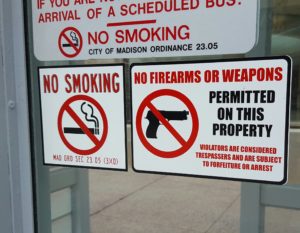 The state Supreme Court is being asked to decide whether Madison can ban the concealed carrying of weapons on public buses.

The high court heard oral arguments Friday in a case brought by Wisconsin Carry, Inc., a pro-group opposed to a rule passed by a city of Madison committee that prohibits weapons on public transportation. The group contends the restriction goes beyond what the legislature intended when it passed the state’s concealed carry law, which granted cities the ability to ban firearms in public buildings.

Arguing before the court on Friday, Deputy Solicitor General Ryan Walsh said the law still did not give cities a “free hand to ban firearms on their property,” and claimed the Madison rule goes beyond the restrictions allowed under current state law.

Madison assistant city attorney John Strange said the weapons ban is no different though than rules against bringing a can of gasoline on a bus. “People choose to pay the fare and ride the bus and, when they do, they agree to a certain set of rules,” he told justices.

Strange said cities have the ability under existing state law to set restrictions on how government-controlled property is used. “It’s not like governments can’t do anything with respect to property they control,” he said. “If there’s a giant snowstorm, I can’t go down to the garage and borrow one of the trucks to come shovel my driveway…they can tell me no.”

Both a Dane County judge and a state appeals court previously sided with the city, dismissing the case. The state Supreme Court will issue its decision at a later date.