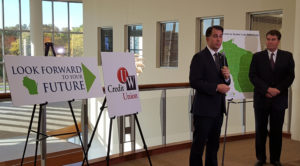 Under a change announced Tuesday, the UW Credit Union will now allow most current and former college students who live in Wisconsin to become members. Previously, membership was limited to current and former UW System students, along with UW employees.

The UW Credit Union is one of 13 financial institutions statewide that will refinance student loan debt and Walker said giving more people access to the lower interest rates the UW provides could go a long way towards reducing the debt some people owe. “This offers a tremendous opportunity for students not only to get student loan financing, but particularly for those looking to consolidate or refinance,” Walker said during a news conference in Madison.

The Department of Financial Institutions also announced a new website, which lists all of the banks and credit unions in the state willing to work with student loan borrowers. The “Look Forward Wisconsin” site also offers advice for current and prospective students, along with their parents, on how to manage the potential student loan burden that can come with attending college.

The effort drew criticism from Scot Ross with One Wisconsin Now, a liberal advocacy group that has been a strong proponent for reforms in the student loan system. “Nearly one million Wisconsin student loan borrowers have over $19 billion in debt and the best Governor Walker can manage is to hold a press conference announcing he is doing nothing and they should go talk to a bank or visit a website,” Ross said.

He questioned how many banks are going to give students or borrowers a loan or better interest rate, when so many of them have to rely on student loans because they lack good credit. “I’d like to find out how I could go into a UW Credit Union or any other bank and ask them to give me a loan with no collateral,” Ross said.

OWN and Democratic lawmakers have advocated for a bill that would allow student loan borrowers to refinance what they owe through the state. The proposal saw little movement though in the Republican-controlled legislature.