You are here: Home / News / Bernie Sanders makes the case for Hillary Clinton in Madison rally 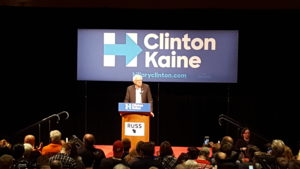 Returning to Wisconsin for the first time since winning the state’s presidential primary in April, Vermont Senator Bernie Sanders urged voters to now cast their ballot in support of Democratic nominee Hillary Clinton in November.

Speaking to a crowd of about 1,200 people at the Monona Terrace Convention Center, Sanders laid out the details of many of Clinton’s positions on health care, education, the minimum wage, and taxes. He drew cheers from the audience when mentioning Clinton would introduced a constitutional amendment during the first 100 days of her presidency to overturn the controversial Citizens United decision, which opened campaigns to corporate donations, along with her plan to provide tuition-free college to almost 80 percent of Americans. “There are a lot of reasons why we should support Secretary Clinton,” Sanders argued.

The former presidential candidate also tried to make the case for why Democrats need to come together in November to make sure Republican presidential nominee Donald Trump does not win the election. “Donald Trump wants to take us back,” he said.

Appearing on stage with Sanders was Democrat Russ Feingold, who is trying to reclaim the seat he lost to Republican Senator Ron Johnson in the 2010 race. Sanders said Feingold is someone who he has worked with for years, and that he “cannot wait…to see him back by my side.”

Feingold offered praise for Sanders and Clinton, while urging the crowd to fight against the “reckless” GOP nomination of Trump. “We have to reject that, we have to repudiate it, we have to win on November 8th,” he said.

Sanders was expected to attend another rally for Clinton on Wednesday in Green Bay. His visit came as Donald Trump Jr. campaigned in the state for his father, while Trump himself is expected to be back in Wisconsin on Saturday.