You are here: Home / News / Chelsea Clinton campaigns in Wisconsin 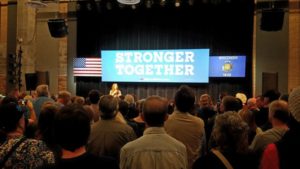 Her Secret Service code name as a child was “Energy,” and that’s what Chelsea Clinton tried to bring to a maximum capacity Encore Theater on the UW-Stevens Point campus Tuesday.

Clinton campaigned on behalf of her mother, Democratic presidential nominee Hillary Clinton, and advocated for early voting among a crowd of all ages, from UW-SP students to retirees. She also made stops Tuesday in Madison and La Crosse.

Clinton called this election “the most consequential” of her lifetime, sharing a story she was told by a Guatemalan immigrant mother after a recent campaign event. “She said, ‘My son went back to school less than two weeks ago… and he’s already had three different kids in his middle school tell him to go back to Mexico, or I can’t wait until we build a wall to keep people like you out. That’s not our country,” said Clinton.

Clinton pointed to her mother’s opponent, Donald Trump, and his choice of words against women, Muslims, and veterans during his campaign. “I never thought I would see in my lifetime the almost-normalization of hate speech from a major presidential candidate,” said Clinton. “None of that represents the country that I want for my children or for our shared future.”

An attendee of the rally commented on Hillary’s perceived lack of emotion and humanity, but also said that many voters have watched Chelsea grow up, and she’s been a window into Hillary’s world.

Republican Party official said the campaign stops in the state Tuesday show Clinton is worried about the state. “Hillary Clinton’s campaign is spending precious time in a state that was once thought to be a lock for Democrats, but as the election approaches, Wisconsin voters know she is not only untrustworthy, but a part of a broken system that has left so many Americans feeling less safe and less secure,” said Republican Party of Wisconsin Executive Director Mike Duffey.

Hillary Clinton holds a six-percent lead over Donald Trump in Wisconsin, according to the latest Real Clear Politics poll average.