You are here: Home / News / Chelsea Clinton thumps Trump on stump in Racine 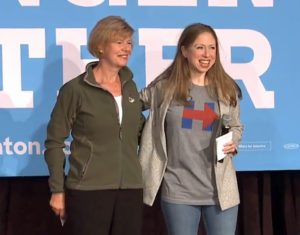 Clinton spoke to a crowd of about 300 at downtown Racine’s Living Light Community Center on Monday, campaigning for her mother and urging people to take advantage of early voting.

The younger Clinton said her mother wants to help build a country “in which we are stronger together,” while Donald Trump appears to have a very different goal in mind. “I think that Donald Trump is advocating for people who look like him,” Clinton said to scattered applause. “For white men. Straight, wealthy white men.”

Chelsea Clinton is the latest surrogate for Hillary Clinton to make a stop in Wisconsin. Over the weekend, former President Bill Clinton campaigned for his wife in Milwaukee. And last Friday, Massachusetts Senator Elizabeth Warren attended a Madison rally on behalf of Clinton and U.S. Senate candidate Russ Feingold.

WRJN contributed to this report