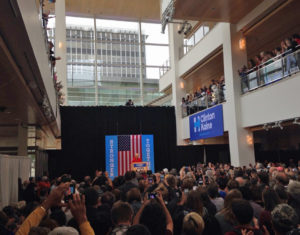 A day before Donald Trump brings his campaign for president back to Wisconsin, U.S. Senator Elizabeth Warren was going hard after the Republican presidential candidate during a rally in Madison.

“Donald Trump is now the leader of the Republican party,” the Massachusetts Democrat told a crowd gathered in the downtown Overture Center. “Don’t kid yourself. Not Mitch McConnell, not Paul Ryan, not Ted Cruz. This is Donald Trump’s party and the party now reflects Donald Trump.”

Warren, campaigning for Johnson’s Democratic opponent Russ Feingold, referred to Trump as “a small insecure money grubber who cares about no one but himself,” and “a selfish little sleaze ball, a man who will never be president of the United States.”

The appearance by Warren, a high-profile politician who’s popular with party activists and rank-and-file Democrats alike, is yet another sign that Wisconsin is seen a crucial state, not only for the presidential campaigns but for down ticket races like the Johnson-Feingold rematch. Johnson is viewed as one of the more vulnerable Senate Republicans with Democrats hoping to regain control of the chamber.

In addition to Saturday’s Trump event in Waukesha, the Hillary Clinton campaign is focusing on Wisconsin as well, with former President Bill Clinton is scheduled to campaign Saturday in Milwaukee.

“Hillary Clinton is sending surrogates like Bernie Sanders and Elizabeth Warren because Wisconsin voters do not trust her,” said Pete Meachum, Wisconsin State Director for the Trump campaign. “Unlike Hillary Clinton, Donald Trump understands the concerns everyday workers are facing. To him, they’re real people who deserve to be represented by someone who will fight for them, not dismissed as a ‘basement dweller’ or ‘deplorable.'”