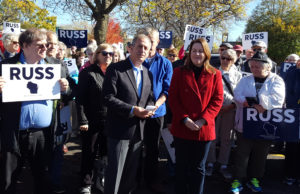 Democrat Russ Feingold says recent comments from his opponent labeling him as a “phony” are a sign he’s desperate when faced with losing his seat in next month’s election.

Republican U.S. Senator Ron Johnson said in an interview last week to the Milwaukee Journal Sentinel, and again on the campaign trail this weekend, that he doesn’t respect Feingold because of his phoniness. “The difference between me and Senator Feingold is that he’s a complete phony and I’m actually genuine,” Johnson said at a campaign event Sunday.

Asked to respond Monday, Feingold at first said that he was going to respect the office and respect Johnson. “I’m not going to go there,” Feingold said, ahead of going in to cast his in-person absentee ballot for the November 8th election.

However, when asked if he was surprised to see Johnson making those type of comments, Feingold said “I realize when somebody is desperate, when a politician feels he’s probably going to lose, he probably gets a little shaky on that and starts maybe doing some things he shouldn’t do.”

AUDIO: Russ Feingold responds to Johnson labeling him a “phony” (:59)

Feingold has regularly been ahead of Johnson in polling on the race, although recent results have shown the Republican closing the gap between them. Johnson’s campaign also argued in a memo to supporters that they have growing momentum heading into the final two weeks before the election.

Feingold is seeking to retake the seat he lost to Johnson in the 2010 election.