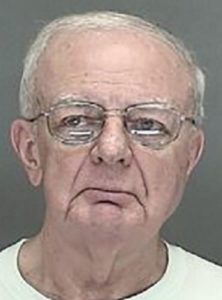 A retired Catholic priest will spend about four months in jail for exposing himself to a teenage boy in the Green Bay suburb of Allouez. Seventy-eight-year-old Richard Thomas was sentenced to 120 days behind bars, during a hearing in Brown County court Friday morning.

Thomas was living in a home for retired priests in March, when he was accused of flashing the teen four times, while the boy was walking to school.

Thomas entered no contest pleas to two felony counts of exposing himself to a child, last month. He started seeking treatment earlier this year. Thomas will also spend three years on probation, after he’s released from jail.

The Catholic Diocese of Green Bay banned Thomas from public ministry. A statement from the diocese said they are saddened by the situation, and went authorities, after receiving the report of misconduct about Thomas.