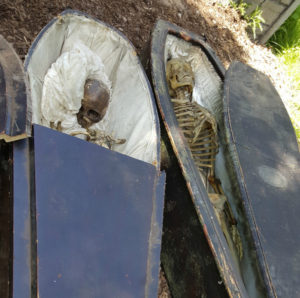 A creepy discovery at a popular Green Bay haunted house.

A project designer at Terror on the Fox was rummaging through props in a storage area and came across two antique caskets that had been donated by a funeral home. While looking inside, they found bones in both burial boxes and a complete human skeleton in one.

Senior project manager Mike Krausert says the revelation came as a surprise. “Nobody knew the whole time they were sitting there for several years that there were actual bones in them.”

The skeletal remains were used in the medical field and likely date back to the 19th century.

The real bones are displayed inside the Dead House attraction, and attraction operators are considering what to do with them next. “You know, we’re being very respectful about how we handle them or display them. At the end of our season, we’re going to sit down, meet, and figure out what’s the next step. Do we want to keep these or do we want to donate them somewhere,” said Krausert.