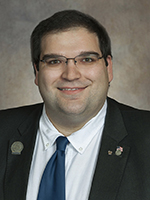 A Wisconsin lawmaker says he warned that a loophole in a state law could invalidate local rules against hosting underage drinking parties.

A state appeals court this week sided with a Fond du Lac County man who was ticketed for hosting a graduation party where teens were drinking. The parent had argued that a local ordinance was invalid because it was stricter than a state law that makes it illegal for adults to host drinking parties for minors on premises they own.  Stuart Muche claimed in his appeal that “premises” refers to a place with a license to sell alcohol, such as a tavern or liquor store.

Representative Andre Jacque (R-DePere) says the court was right that local ordinances can’t be stricter than the state’s rules. He wants to change that, creating “a uniform standard for individuals who are contributing to the delinquency of minors.”

Jacque says the state Supreme Court ruled in 2008 that the state “hosting law” only covers businesses with liquor licenses. “We shouldn’t have one standard for people that have a liquor license and those that are furnishing alcohol to minors under other circumstances,” he argues.

Jacque offered a bill last session but it failed to advance because some lawmakers didn’t think anyone would challenge the issue in court. He plans to offer similar legislation next year.