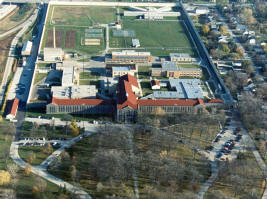 A northeast Wisconsin lawmaker wants the Department of Corrections to consider replacing a state prison in Green Bay.

Rep. David Steffen (R-Green Bay) says the Green Bay Correctional Institution is over 100 years old and it needs more than $140 million in upgrades. He says a new facility would also ease the prison system’s space needs, with all of the state’s prisons at near capacity. “We need to have some long term plans, which currently do not exist,” he argues.

Steffen wants the DOC to include a funding for a study on replacing the facility in its state budget request.

Steffen also believes building a new prison in a different location would free up the site of the current prison for redevelopment. He described the 50-acre property as “prime real estate” along Highway 172, which could generate $80 million in economic development.

Steffen says he would like any new prison to be within 15 miles of the current one, to keep the jobs in the area.