You are here: Home / Packers / Packers add running back help 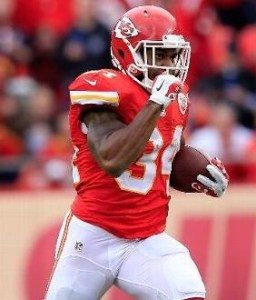 The Green Bay Packers added some running back depth on Tuesday when they acquired Kansas City Chiefs running back Knile Davis.

The Packers will send a late-round draft pick to the Chiefs, which is expected to be conditional on Davis’ performance with the Packers.

Packers coach Mike McCarthy said at his Tuesday news conference that Davis had just arrived at Lambeau Field late this morning and the Packers were busy getting him ready for his first practice.

Davis becomes the first player acquired in a trade by the Packers since safety Anthony Smith was sent from Jacksonville to Green Bay for a conditional seventh-round draft pick in 2010.

With just two days to prepare for Thursday night’s game against the Chicago Bears, it’s still possible the Packers could also move Don Jackson to the 53-man roster from the practice squad.

Davis started against the Packers in the teams final exhibition game on Sept. 1 in Kansas City.  He finished with 58 yards on 14 carries and a touchdown.  He also had one catch for 7 yards.  He was originally a third round pick of the Chiefs out of Arkansas in 2013.