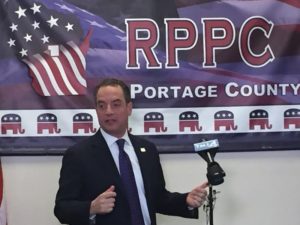 The head of Republican National Committee believes his party’s presidential nominee still has a chance to win Wisconsin – despite Donald Trump consistently trailing in the polls here.

During a stop to visit the Portage County Republican Party on Tuesday, RNC chairman Reince Priebus argued that Wisconsin has a “very independent” electorate during presidential elections. “I think everyone can admit this election has been like none other, and the electorate right now is very volatile.”

Regardless of the outcome of the presidential race in the state, Priebus does not believe the outcome will have an effect on U.S. Senator Johnson’s chances of retaining his seat. The Republican incumbent is locked in a tight re-election battle with Democrat Russ Feingold, who was unseated by Johnson in the 2010 election.