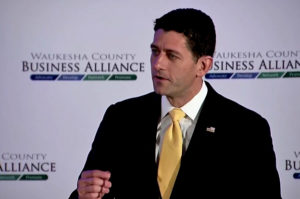 House Speaker Paul Ryan is promoting his “Better Way” agenda, after putting nearly as much distance as possible between himself and the campaign of Republican presidential nominee Donald Trump.

Ryan spoke to a meeting of business people in suburban Milwaukee on Thursday  – and appealed for a focus on the Republican agenda. “This is who we are and what we’re trying to achieve,” Ryan said. “So forget about the buzz of the day and forget about what Twitter storm is going on in – I don’t the last 20 minutes or so. Maybe the last five minutes.”

Ryan’s remarks in Brookfield echoed his speech at an annual fundraiser in his district last weekend. That event – the Walworth County Republican Party Fall Fest – was originally supposed to feature Republican presidential candidate Donald Trump. Ryan disinvited Trump, after the release of a video showing the nominee making sexually aggressive comments about women in 2005. He also said he would no longer defend Trump or campaign with him. But like fellow Wisconsin Republicans, Governor Scott Walker and U.S. Senator Ron Johnson, Ryan has stopped short of pulling his endorsement of Trump.

Ryan urged those attending the Brookfield event on Thursday to check out the GOP’s Better Way. “Taking our principles – the ones that built this country – apply them to the problems of the day, offer solutions, win an election, get it done, save this country, go Packers.”

Ryan left the event immediately after his comments and did not take questions as originally planned. Ryan will be in Madison on Friday. He is scheduled to deliver remarks to a group of College Republicans at noon, at the Madison Masonic Center.

Trump plans to make two stops in Wisconsin next week – in Green Bay at the KI Convention Center Monday afternoon, and at State Fair Park in West Allis later that evening.